Information about the Foula Ferry Service 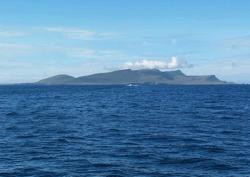 Foula, (Old Norse: Fuglaey = Birds Island) is the most westerly island in Shetland.  It is approximately 3.5 miles long, north to south, and 2.5 miles wide, and lies approximately 22km west of Walls, on the west Mainland.

The isle is dominated by its five hills which give it its distinctive profile.  The highest point being the Sneug, at 418m, followed by the Kame, at 376m, which is the highest point of the sea cliffs on the western side of the island, and both the highest sheer sea cliffs and second highest sea cliffs in the UK, only surpassed by those on the isle of St Kilda.

Hamnafield at 344m, the Noup at 248m and Soberlie complete the quintet.

When viewed from the Mainland the isle can make quite a spectacular scene, particularly under snow, when it is often likened to a huge iceberg on the horizon.